My name is Emma, I am 21 years old, and I am a coeliac. I have always had a love, passion, and interest in food, but I believe this really started when I was diagnosed as a coeliac back in 2005, at the age of five. 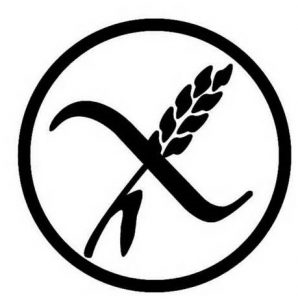 Coeliac disease is a lifelong autoimmune disease that is triggered by the protein gluten, which is found in cereals including wheat, barley, oats (if not certified gluten-free), and rye. It can cause a wide range of symptoms including diarrhoea, abdominal pain, and bloating, causing great discomfort for the sufferer.

For as long as I can remember, I have had to read the back of food packages and learn what I can and cannot eat and I took an interest from an early age in what I was eating. I feel a responsibility to educate others on what living with coeliac disease is really like, and what others can do to make life easier for coeliacs. While awareness of coeliac disease is growing, early diagnosis is extremely important to avoid people suffering for too long and causing long term damage.

My story with coeliac disease began at a time when information about this disease was not as widespread as it is today. People at the time did not know much about the disease, and the health-related consequences associated with being an undiagnosed coeliac. It was then and still is today, rare to be diagnosed with coeliac disease as a child. For some people today, eating gluten-free is a fad diet, viewed as being a healthy diet to have, but for coeliacs like me, it is a necessity to be healthy.

Diagnosis and Adapting to Gluten-Free Life

As I was only young at the time of diagnosis, I do not remember too much about the symptoms I experienced, but my parents tell me that I displayed the common symptoms of coeliac disease such as stomach problems and a failure to thrive, and after having a series of blood tests and an endoscopy, it was confirmed that I was coeliac. At the time no one else in my family was coeliac, so my family did not know much about it, and it came as a bit of a shock. Since I was diagnosed, my younger cousin has also been diagnosed as coeliac, showing that there evidently is a strong genetic link with coeliac disease in families.

Once diagnosed, my family and I met with a dietician and were given the names of lots of gluten-free companies to help the transition to a gluten-free lifestyle. We also were advised to join the Coeliac Society of Ireland, and I am still a member of this society. Being a member of the Coeliac Society of Ireland allows you to have access to a food list which is a great help especially when initially diagnosed. You also become a member of a community that offers support and provides help to those diagnosed.

I do not remember finding it difficult to adapt to the new diet, but I suppose I was lucky in that I was only five at the time and had not had the chance to miss products such as cakes as much. I do however miss bread, as gluten-free bread is just not the same, but I am pleased to say that it has come a long way since the early days! I think, for this reason, that being diagnosed as an adult would have been a lot harder. In the beginning, it was probably a bigger issue for my family as they then had to cook gluten-free meals for me, sometimes meaning that two separate meals had to be cooked and they had to learn about how to avoid cross-contamination.

I am the only coeliac in my immediate family and being coeliac has most definitely had an impact on my family in the way we cook and store food at home. I keep my gluten-free products such as flour, bread, and pasta separate from gluten-containing foods to prevent cross-contamination, as well as having a separate toaster and butter. We also must ensure that the oats I use are certified gluten-free, as regular oats are not suitable for coeliacs due to them being grown alongside gluten-containing grains. Clean utensils are needed before preparing the food that I am going to eat.

When I was young, the job fell on my parents to ensure to read the back of food packages, cook gluten-free meals for me, and educate family and friends on what coeliac disease is and my special dietary requirements. My Mum remembers sending me in the early years to birthday parties with my own snacks so that I would not feel left out! The main problem was on the rare occasions we tried to go out to restaurants. My parents had to always ring ahead and explain my dietary restrictions so that they could ensure that there would be food on the menu that I could eat. Sometimes restaurants suggested I brought my own pasta or pizza base for them to work with to prepare my meal. Nowadays, restaurants have clearly labelled gluten-free items on menus, have a wider range of products available that are gluten-free, and I especially love it when a manager hands me a designated gluten-free menu – this is fantastic and makes eating out so much easier as I have a real sense that the restaurant truly understands the constrictions of cooking a gluten-free meal in their kitchen!

As well as the organisation that is required when someone is coeliac in the house, the price of gluten-free products is also generally more expensive than its gluten-containing equivalent. Unfortunately, a lot of the gluten-free products on the market are heavily processed and have a higher level of salt, sugar, and fat as a result. These reasons have resulted in my family and I doing a lot of cooking and baking over the years, experimenting with new recipes, and adapting old recipes. Those non-coeliacs who choose a gluten-free diet, thinking that it is a healthier diet to have, are often unaware of the hidden salt, sugar and processing steps that are part of many of these products.

Over the past sixteen years, I have seen a dramatic change in the food industry, especially in the awareness of coeliac disease and the availability of gluten-free food. When I was initially diagnosed, there was a limited range of gluten-free products available. Now I find eating gluten-free relatively easy. Initially, my parents had to order and collect gluten-free food on prescription from our local chemist. Health food shops had a limited stock and supermarkets had at most a ‘free from’ shelf usually located with health products and baby food, with limited products such as gluten-free bread which tasted like cardboard and macaroons on display. Now there is a much wider choice and a designated ‘free from’ section in all supermarkets, which makes it easy for coeliacs, especially those newly diagnosed.  This is an expanding market with many new companies entering the marketplace. 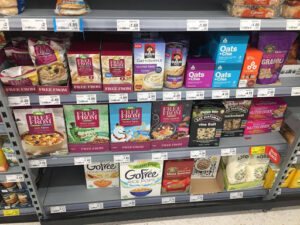 There is no doubt that being coeliac today is much easier than it was in the past but in my opinion, there is still a lot that could be done, especially in educating people in the foodservice industry about the risks of cross-contamination. Even today, eating out remains to be sometimes a hassle and does require careful planning. I generally tend to go to the same restaurants as I feel confident that the food would be safe for me to eat, and there is a good range of dishes to choose from that are gluten-free.

Spread the Word About Coeliac Disease

As a result of being coeliac for most of my life, I have over the years learned about the importance of sticking to a gluten-free diet. Now that I am older, and am studying food marketing, I feel responsible for educating people on what could be done to improve the lives of people with coeliac disease. One key area where education could be improved is in cross-contamination, specifically a need for vigilance across foodservice outlets such as restaurants, college campuses, hotels, and schools. Unfortunately, some people have the attitude that a crumb will not matter, but for someone who is extremely sensitive to gluten, this could result in severe symptoms.

Nowadays, I spend a lot of time cooking and baking, trying out and adapting recipes to make them suitable for my dietary needs. I aim to show just how far we have come in gluten-free food, showing that gluten-free treats should not just be meringues, macaroons, and an occasional brownie, but that the possibilities with gluten-free food today are endless! Having products such as xanthan gum now available has made such a difference as it has allowed me to make baked gluten-free products (even pastry) with a similar texture to that of the gluten-containing equivalent!

Coeliacs no longer should be feeling left out and should be willing to experiment with what is possible with gluten-free ingredients! Why not get in the kitchen and cook and bake as lots of recipes are easily adaptable! It is also great to see new companies on the market offering gluten-free foods. It is a long way from the chemist food bag of sixteen years ago: the future looks bright for coeliacs!