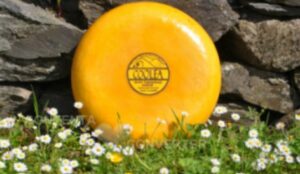 Another trip out to meet one of my Suppliers last week was with Dicky from Coolea Cheese up into the beautiful mountains of Coolea just outside Macroom.

Dicky is the son of Dick and Helene who started the cheese production as a hobby back in 1979 that didn’t take long to progress into a small enterprise which is now known all over Ireland and Internationally.

In 1991 Dicky joined the crew and by 1993 became the main cheesemaker, giving Dick and Helene more time to focus on other areas of the business.

Cheesemaking is an all year round job even when it’s not milking season the cheeses need lots of love and attention while maturing.

Dicky and his right-hand man Denis who has been with Coolea Cheese for several years keep on top of everything all year round.

When it is milking season Dicky uses an amazing local farmer that has been supplying Coolea Cheese with their milk for some time. They would organise to collect their milk late in the evening around 9pm when the temperatures were a little cooler and to ensure they have both evening and morning milk as they have a different consistency.

It all starts very early in the morning at 6 am when the milk is firstly pasteurised and then filled into the milk vat through specially made filters. From there Dicky and Denis will mix the milk to form the curd and constantly checking the curd to ensure perfect consistency.

Once the curd and whey have been separated the whey is drained out and used to fertilise their pastures.

The curd is then filled into the cheese moulds and pressed in theirGouda Cheese Presser that has been used in their cheese-making process since 1986 that was made in Holland.

The following day the curd is set and is removed from the moulds and salted in the brine.

From here each cheese wheel must be coated and stored on stacks of shelves in the maturing room. The wheels are turned each morning and coated. By turning daily, they expose all the sides of the wheel to air regularly for the rind to develop properly.

Also, each shelf and wheel is checked for any mould and managed immediately to ensure instant removal of mould to prevent spreading.

The minimum maturing time is months but can be matured for years once looked after properly.

They then distribute to a number of retail businesses like my own. I can’t wait for you all to come and try some of this delicious cheese. One of many that I will have in the store.

There is loads more info on their website on www.cooleachhese.com so go and check them out