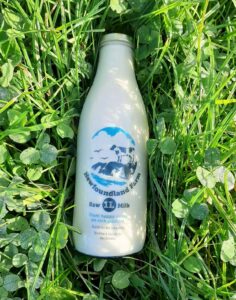 One of the most important things for me when choosing products for my store is meeting the artisan producers and farmers as much as I can. I had a wonderful few hours on Aidan and Aislings Newfoundland Farm in  Nohoval Cork learning all about their raw milk.

Besides getting a tour of their milking parlour and meeting some of the lovely Friesian cows, we took a walk up over the fields. They farm 150 acres that is full of luscious green grass overlooking the beautiful Newfoundland Bay near Nohoval in Cork.

Both are so passionate about creating an amazing product starting from the soil where Aidan is currently experimenting with natural farming methods which is a whole other level of organic farming.

They are focused on ensuring their cows have extremely healthy guts which are then transferred to the beautiful raw milk they produce full of nutrients that will be available in my store.

Aisling also from a farming background, grew up on a tillage farm producing beautiful vegetables and now that her boys are all at school she has gone back to UCC to study Specialty Food Production while also getting their raw milk out to their customers through markets or through specialised retail stores like The Gourmet Grocer. I had a taste of their milk and it was utterly delicious!

They became fully registered in 2021 and started the sale of their milk in November through markets and speciality stores such as The Gourmet Grocer.

My own introduction to raw milk was only a few years ago, I know as a child I definitely had some raw milk and over the years have loved the cheeses made from raw milk but from an educational point of view, I only started to really understand the benefits when I was down in Ballymaloe Cookery School. and also the challenges farmers have faced and are still facing when it comes to the legislation for the production and sale of raw milk and raw milk produce.

In 2011 there was a huge backlash from farmers when the FSAI proposed the sale of unpasteurised milk be banned completely. Darina Allen was one of the people in Ireland that lead the campaign to legalise the sale of Raw Milk.

The production and sale of raw milk in Ireland today is legal and is overseen by the Department of Agriculture, which drew up a “statutory instrument” in 2015 to regulate the terms under which raw milk can be sold

Raw Milk Ireland has a list of all producers of raw milk and members of Raw Milk Ireland have worked alongside officials from DAFM and FSAI since 2015 to develop a set of guidelines that could be approved by all parties.

You can check out guidelines and lots more information about Raw Milk Ireland on their website www.rawmilkireland.com

My own personal journey with raw milk as I said above started while I was in Ballymaloe Cookery School. I lived on the farm and part of that meant also consuming all of the wonderful organic produce from the farm. This included raw milk. For me I have been an asthmatic all my life and also have suffered from gut issues. About 6 weeks into my course I started to see differences. My asthma had improved significantly and I started to notice differences in my skin, hair, sleep, nails, general mood. When I really looked into this I realised that the most significant change I had made since starting with Ballymaloe was my daily consumption of raw milk. Of course, I was eating more organic and fermented produce which also helped but in general, this was the one item I added to my diet that I had not been consuming before the course.

Unfortunately, once I left Ballymaloe I found it very difficult to source raw milk. It is not readily available and definitely not in any of the supermarkets. When I did come across it I always bought it. Now it’s not something you buy in bulk either given the shelf life of 3 days so I am utterly thrilled now that I am going to have this in my store and let me tell you I will be moving onto raw milk full time now myself!