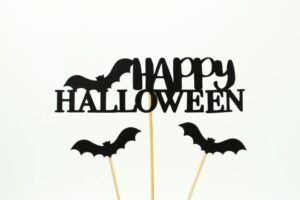 Oh, how I love Haloween, from being a kid tricker treating and playing games while gobbling down bucket loads of sweets. A parent’s worst nightmare, sugar rush for days!!

A little bit of history

People celebrate Halloween all over the world, but did you know many of the customs associated with it originated in Ireland? The Ancient Irish celebrated Samhain, (pronounced sow-in) the first day of winter, on November 1st. The eve of this day, Oíche Shamhna, (Halloween) October 31st, has in Ireland traditionally been a time of feasting, dressing up and games.

People would light bonfires and wear costumes to ward off ghosts. In the eighth century, Pope Gregory III designated November 1 as a time to honour all saints. Soon, All Saints Day incorporated some of the traditions of Samhain. The evening before was known as All Hallows Eve, and later Halloween.

Over time, Halloween evolved into a day of activities like trick-or-treating, carving jack-o-lanterns, festive gatherings, donning costumes and eating treats.

The Celts, who lived 2,000 years ago, mostly in the area that of Ireland, the UK and northern France, celebrated their new year on November 1. Celts believed that on the night before the new year, the boundary between the worlds of the living and the dead became blurred. On the night of October 31, they celebrated Samhain, when it was believed that the ghosts of the dead returned to earth. 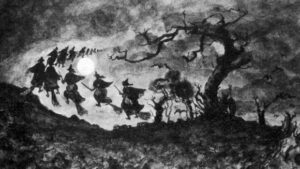 Celts thought that the presence of the otherworldly spirits made it easier for the Druids, or Celtic priests, to make predictions about the future. For many, these prophecies were an important source of comfort during the long, dark winter.

To commemorate the event, Druids built huge sacred bonfires, where the people gathered to burn crops and animals as sacrifices to the Celtic deities. During the celebration, the Celts wore costumes, typically consisting of animal heads and skins, and attempted to tell each other’s fortunes.

When the celebration was over, they re-lit their hearth fires, which they had extinguished earlier that evening, from the sacred bonfire to help protect them during the coming winter. (Source @www.history.com)

Already spotted around the streets are the carved out pumpkins ready to spook you this Haloween. No home is considered properly decorated these days without a carved illuminated pumpkin on the doorstep! This ornament has its origins in the Irish folktale of Jack O’ Lantern. This tells the tale of Jack a man who tricked and trapped the Devil using a cross. Jack refused to free him until the Devil agreed never to take his soul.

Many years later Jack died but because of his many sins was refused entry to Heaven. On attempting to get into Hell instead, the Devil recalled his promise and refused to take his soul. The Devil gave him a lit-lantern to guide Jack on his wanderings through the darkness of eternity. He became known as Jack of the Lantern or Jack O’Lantern. 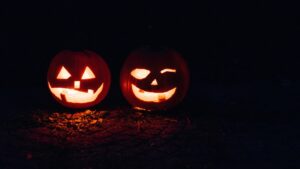 In Ireland, people commemorated the tale by carving a hollowed turnip with a scary ‘face’ for Halloween and lighting it with a candle. Over the centuries, Irish immigrants to America continued the tradition using easier-to-carve brightly coloured pumpkins, thus the trend spread across the world.

Halloween was seen to be a ‘liminal’ time, when a window occurred that allowed forces from the Otherworld into ours. People lit bonfires and made much noise to drive away the evil spirits and travelling alone was avoided on this night. With shapeshifters, fairies, and the ‘Púca’ thought to be at large, people feared being kidnapped by them. Disguising oneself as a spirit was thought to avoid this, as the ghouls from the Otherworld would not abduct their own. Wearing a mask or a grotesque disguise was believed to trick them. To this day witches, goblins and ghosts remain popular choices for Halloween costumes.

As for the trick or treating, or “guising” (from “disguising”), traditions, beginning in the Middle-Ages, Children and sometimes poor adults would dress up in the aforementioned costumes and go around door to door during Hallowmas begging for food or money in exchange for songs and prayers, often said on behalf of the dead.  This was called “souling” and the children were called “soulers”. (source@www.todayifoundout.com)

An example of a relatively recent (19th century) souling song is as follows:

Any good thing to make us all merry.

One for Peter, two for Paul

Three for Him who made us all.

In Scotland and Ireland, young people would visit their neighbours’ houses and sing a song, recite a poem or perform another sort of ‘trick’ before receiving a treat of nuts, fruit or coins.

What’s the meaning behind the phrase? The term trick or treating wasn’t used until the 1920s, when it was adopted in America. The practice of guising made its way to North America, probably brought over by the Scottish and Irish in the late 19th or early 20th century

Once guising morphed into trick or treating, children no longer performed for treats, but instead vandalized and extorted for their confectioneries.

But adults weren’t too happy about being forced to hand out sweets, under the threat of a trick, when this first started – and saw it more as an offer they couldn’t refuse. 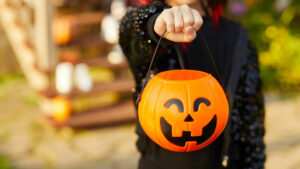 Nowadays Trick or Treating is a fun family tradition where the kids go from door to door looking for treats without any knowledge at all of the history behind this tradition!

Games and fun at home

As traditions go Halloween was believed to be the best time to tell fortunes and have fun. Reading tea leaves was a popular pastime in Ireland but predictions read at that time held more credence. Some people take their fortune-telling very seriously!

When women were at home preparing apples for the festivities the Apple Peel tradition commenced for all the single ladies. A young single woman would peel an apple in one long strand and toss the peel over her shoulder. If the peel landed in the shape of a letter, that was supposedly her future husband’s initials. Apparently, lots of girls were to marry a guy with the letter S!!

Another fortune-telling tradition was the Blowing Out Candles game that has been played for centuries at parties. To play the Candle Game, you need three candles, one pink, one green and one orange and a blindfold.

Blowing out the pink candle indicates love and romance lie ahead. The green candle means that the person will receive money. The orange candle means the player will be going on a trip. Be careful not to set yourself on fire in this one!

A more common game which I remember playing in my childhood and we still do this every year is The flour game.  You pour flour into a round shape on a plate 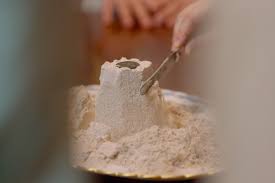 and set a cherry/sweet on top of the mound of flour. Each player takes a turn cutting the flour trying not to allow the cherry to fall. Players continue to take turns cutting the flour until the candy falls. The person that cuts the flour which causes the Cherry to fall has to then retrieve it with his mouth. This is one messy game but so much fun

Another one is the Hanging apple game, my gran used to love this one. You attach strings to the stalks of the apples and hang them off something. We used to hang them off the top of the Architrave of a doorway!

The aim is to be the first person to eat all of your apple without using your hands. Prizes can be given not only to the person who finishes first but who also manages to get the first bite. This was always harder than one thought, especially getting the first bite!!! It is said that whoever gets the first bite will be the first to marry or if already married will get a prize! 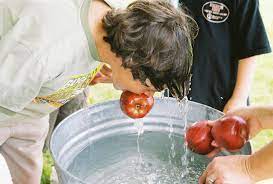 The other game was the bobbing apple or The coin & apple game. Another one loved by kids, get a big bucket of water and a bag of apples. On each apple insert coins from. The coins can be of any value. The apples are dropped in the water and each player with their hands behind their back are to try to take a bite out of the apple whilst getting a coin also. Each player gets to keep the coins they retrieve. Remember to wear the waterproof mascara for this one ladies!!

Once the games are done one of the most prominent traditions in Ireland is the serving of “Irish Barmbrack” (bairín breac). Barmbrack is a sweet cake made with yeast and ‘speckled’ with dried fruit.

This is usually served amongst friends and family. Everyone takes a slice of the Barmbrack. There is great excitement when this happens as there are various items hidden throughout the cake which supposedly predict your “fortune” for the coming year.

Each item is supposed to carry a message for those concerned; to find a pea means you won’t marry over the next year, a small piece of cloth foretells poverty, a ring means one would be wed within the year, a matchstick to “beat your wife” 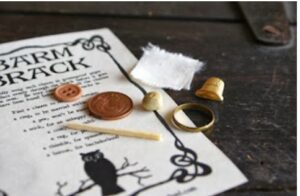 warns of an unhappy marriage and a coin represents great wealth. While nowadays, it is unusual to find a Barmbrack that contains all of the above objects, the ring remains an ever-popular addition in commercially produced Barmbrack.

Barmbrack is usually served sliced and buttered. It is perfect for those blustery evenings that are characteristic of October in Ireland.

So, this Halloween, carry on the tradition of our Celtic ancestors by making your own Barmbrack at home. 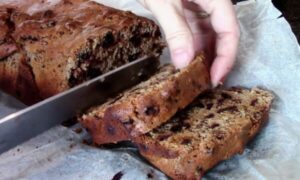 Happy Halloween everyone, remember to have the bowls packed full of sweets for the little ones calling and have fun with the traditions and games that come with it. 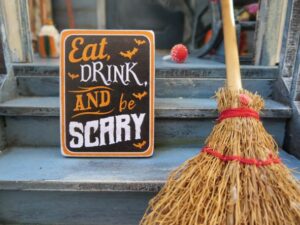 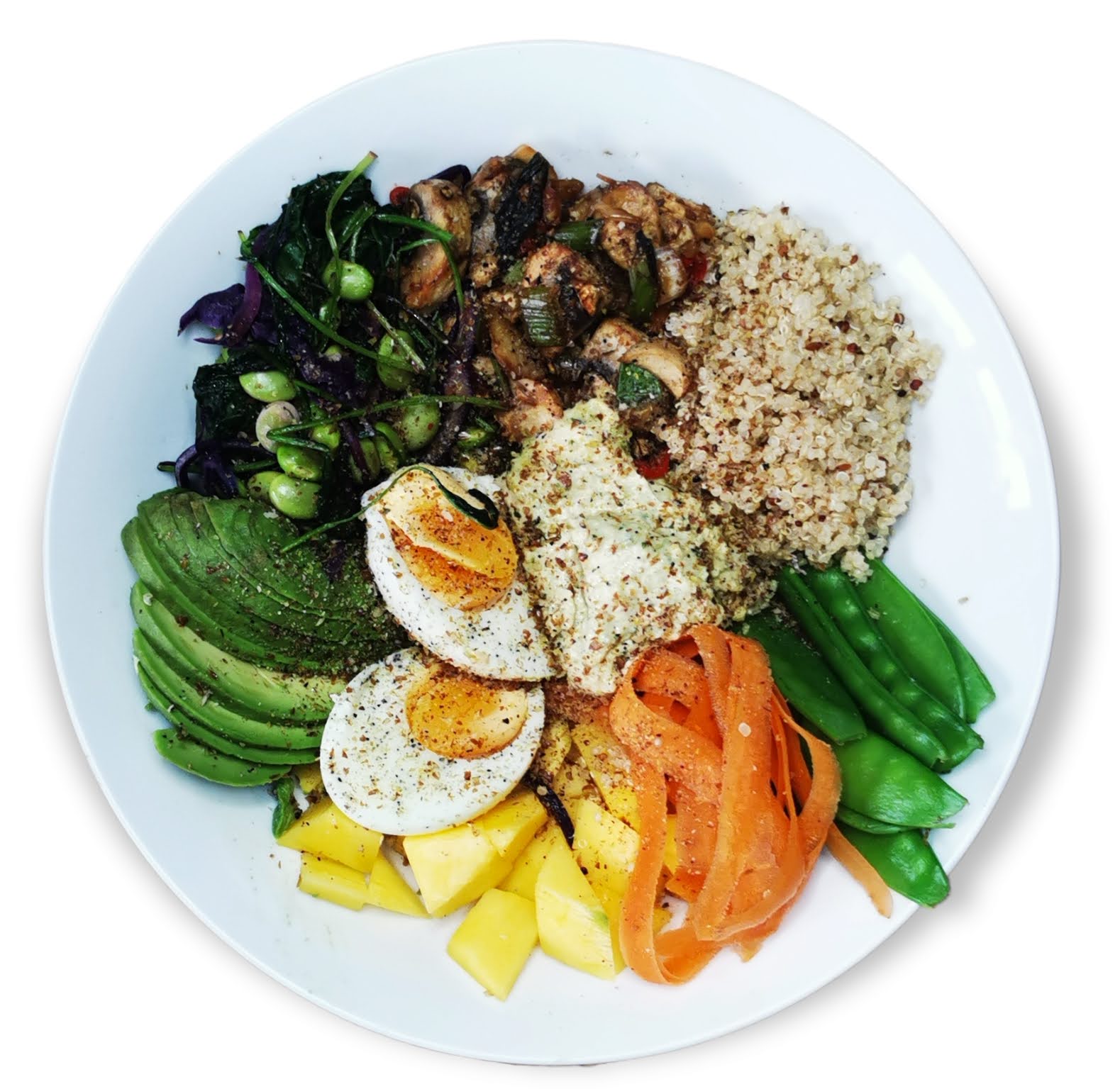